Much has already been written about the 2017 vintage in Napa Valley, but nothing equals actually tasting the wines from this very memorable vintage.  Characterized by a record-breaking rainfall in late winter/early Spring, then cooler temperatures for much of Summer until August turned alternatingly warm/hot, the year certainly saw a bit of every type of weather.  Fortunately, these events were sequenced perfectly; the vines grew well in Spring because of the abundant rain, creating healthy canopies which protected the fruit well throughout summer and even into the warm days of August.  These abundant canopies also helped to create a fully-ripe crop a few weeks earlier than we might otherwise expect, and hence the grapes for the Keever 2017 Cabernet Sauvignon were harvested between September 12 and 18, 2017, which gave them just a touch more time in barrels before being bottled in May 2019.

Ultimately, of course, the story of the vintage becomes a story of a wine.  The 2017 Keever Cabernet Sauvignon shows abundant aromatic intensity (in part due to a cooler June and July) with perhaps just a touch more concentrated ripe red cherry fruit due to the warm August.  The aromas of course also show the touch of sweet anise, tobacco, and spiced plum so typical to the Yountville region.  At entry, the palate is broad, then gains power as the fruit flavors lift.  With a well-experienced nod to our house preferences, the tannins are silky/velvety now, and will further resolve if given the opportunity to age for an additional decade or more.  Approximately 717 cases were bottled in May 2019. - Celia Welch, Aug 17 2020

Made form 100% Cabernet Sauvignon, the 2017 Cabernet Sauvignon gives a deep garnet-purple and has quite a serious, slightly closed nose of warm blackcurrants, black cherry compote, baked plums and espresso with hints of forest floor, truffles and tar. Medium to full bodied, the palate is packed with black fruit preserves and savory layers, with a chewy texture and plenty of freshness on the long, earthy finish.  - Lisa Perotti-Brown, Wine Advocate: 93+ 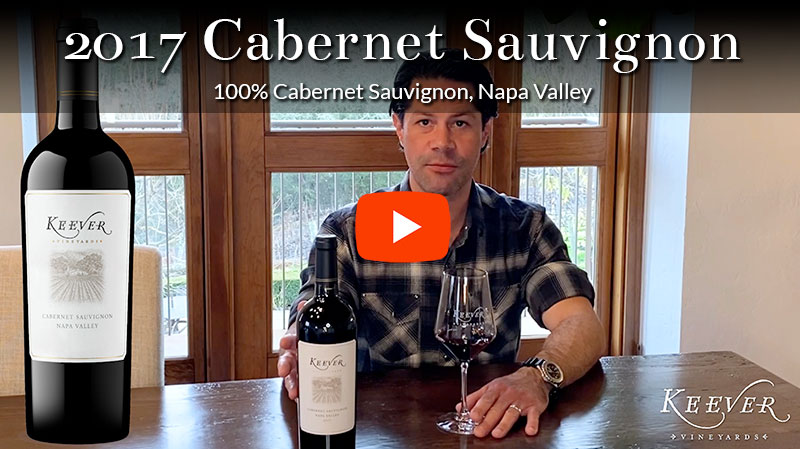